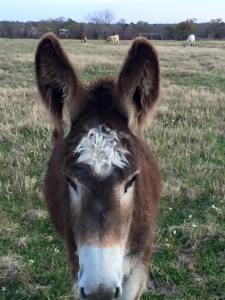 Meet Gypsy.  This is about the average amount of personal space she allows me when I walk through the pastures of our farm. As I make the rounds feeding animals, she silently follows approximately one foot behind me.  I can’t help but chuckle when I look at my shadow and see her huge ears rising above my head.  Did you know that Donkeys can REALLY take a liking to a person. No….really. This donkey practically follows me into the house every time I come home from work. I can actually picture her standing in the kitchen with me watching me cook at any moment.

We got her for $35 from a man who picks up unwanted donkeys from people who call him.  That is what he does for a living.  People.  There are a lot of donkeys out there who are needing homes.  The funny thing is…..I never knew I would love owning a donkey so much.  She is hilarious.

When one of us comes outside,  she gets super excited and starts hee-hawing and making a fuss when she sees the dogs jumping around and greeting us at the door.  Guess what I didn’t know about donkeys?  Donkeys HATE dogs.  They are natural enemies with dogs because their job is to protect a herd from coyotes and, you got it, a dog looks an awfully lot like a coyote.  So it completely makes sense that they would not like any canine creatures. Thus the next scenario.

When did I figure this out completely? I believe it became clear to me the morning I was walking out the door to go to work with my school bags, my purse, and not one, but two drinks in hand.  It was then that my dogs ran up to greet me at the car as I was walking from the front porch and Gypsy decided to go into her full swing “protect my herd” mode.  Guess what?  I am, apparently, her herd.  She kept making runs past me, kicking at the dogs.  It felt A LOT like she was trying to kill me.  I was trying to open the car door with my two drinks in my two hands and my book bag and purse swinging wildly as I tried to open the door.  I am pretty sure that I would win the $100,000 America’s Funniest Videos contest hands-down if people could have seen me trying to get into my car and away from the crazed donkey.  It was only after I sat in the car regaining my composure that I realized she wasn’t trying to GET ME, she was trying to PROTECT ME from the dogs that were surrounding me.  It was then that I remembered hearing that donkeys hate dogs.  I wish I would have remembered that before I almost killed myself trying to get into the car!

In the picture above, the cows in the background just above Gypsy’s ears are yet another example of my ignorance concerning animals. We are so thankful to be able to collect a small herd of cattle in order to meet our agricultural exemption qualifications for our land.  I have been attending the local auction almost every weekend and have really enjoyed getting to know some of the local ranchers in the process. They eagerly help me to determine how healthy the cattle are that I am bidding on and prompt me to bid on the ones that are healthy and will be easy for us to raise on our land.  As a rule, the cattle are usually in the auction ring for about 10-15 seconds before they are purchased so you have to make decisions quickly.  It seems that I made decisions a little too quickly yesterday because I am pretty sure I ended up with two baby longhorn heifers even though we were not planning to raise any Longhorns. (Besides our son, Brave Heart, of course!)  The two heifers were exceptionally beautiful and I got caught up in that fact when I decided to bid on them.  After that, they were out of the ring so quickly that it wasn’t until they were delivered by a local rancher that I realized they resembled Longhorns.  Then, one of my sweet friends whose three daughters raise champion Longhorns, immediately sent me a message asking if they had horns yet.  That pretty much confirmed my slight suspicion and made it a fact!

Obviously, I have a lot to learn about farm animals and farm life.  There will be mistakes made, to be sure, but I am thankful for my lifelong love of animals and The Outdoorsman’s knowledge of farm animals as well.  He always tells me to give the animals space and time to adjust and, just when I think an animal isn’t going to work out, it settles in just as he says.  I am pretty sure he is actually Grizzly Adams in disguise.  Thank goodness, I loved Grizzly Adams almost as much as I loved Pa Ingalls!

Recipes showing step by step directions with pictures and a printable recipe card.

"A blog about nothing." - Jason Alexander

Growing and changing as God leads us on the exciting journey He created for our family.

A city chick with a country soul.